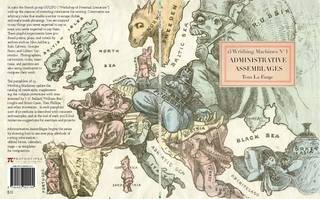 the cover of the first of my 13 Writhing Machines pamphlet

One of the constraints discussed in this pamphlet uses maps as templates for literary creation. This cover shows a map dating from around the time of the Franco-Prussian War of 1870 and uses the shape of nations on the map to caricature their various dysfunctionalities. It reminded me of a cold-war refrain my mother used to repeat: "Russia got hungry, took a piece of Turkey, slipped on grease and broke China." Cover design by Joanna Ebenstein.

This series of pamphlets will serve as a comprehensive manual, with explanations and examples, sometimes with commentary, of constrained writing practices. Many of the constraints discussed herein were invented or codified by the Oulipo. Others predate that group or were drawn from the work of a range of writers or were invented by the Writhing Society. The first three have been published by Proteotypes:
Administrative Assemblages (2008) assembles constraints drawn from everyday life: our interaction with maps, calendars, questionnaires, bureaucratic forms.
Homomorphic Converters (2009) generates new text by a change of content within a retained form. Homosyntaxism, for example, keeps the syntactic sequence of an original, but adds all new vocabulary following that code. The Chimera does the same, but the vocabulary is drawn from several sources: nouns from Jane Austen, adjectives from Poe, verbs from Henry Miller, and so on.
Echo Alternators (2010) works with various kinds of homophony, where a variety of senses are grafted onto a similarity of sounds. It features an extended meditation on the life and work of Raymond Roussel.
A fourth, Prosodic Copulators, is under construction; it will propose many superconstraints to be imposed upon the fixed forms of versification, such as the left-handed sonnet, which can use only those letters typed with the left hand.

The Enchantments: The Broken House, Maznoona, Humans by Lamplight

These three novels are set in a human world somewhat thinly overlaid upon the animal world of The Crimson Bears and Zuntig, and joined to it at the omphalos of Mole Place, the booksellers' square in the city. It is a world more visibly enchanted than ours and these fictions examine the various kinds of charm involved. I wanted to explore the impact of the Imaginary on history, politics, human behavior generally.

The Broken House (Spuyten Duyvil, 2015) is about war, love, defeat, shame, food, magic, theater, gardens, poetry, and the politics of a small country ruled by a princely court at its last gasp. Images, false and true, drive various characters either in the direction of absorptive attention or theatrical performance. For a description of Maznoona, see the column to the right of this one. In Humans by Lamplight the agents of enchantment push their powers to create upheaval among the humans but encounter opposition of a kind they didn't expect from a source they considered powerless. To be published in 2018 by Spuyten Duyvil

Two excerpts from The Broken House have been published in 2006: "The Bee Wolf" in MARGINALIA Vol. 1, No. 2, edited by Alicita Rodriguez and Joseph Starr, and the other, "Night Reconnaissance," in the New Wave Fabulist anthology ParaSpheres, ed. Rusty Morrison and Ken Keegan (Omnidawn Publishing).

I wrote this memoir towards the end of my year in Morocco, when Wendy and I were living in the seaside town of Essaouira. What pleased me best about this stay was the way in which my own narrative became absorbed into a skein of other stories, often turbulent, those of my friends, and particularly that of the two chameleons, Tetta and Haha, that we were given as part of a ritual to drive out bad spirits from our apartment. Their lives, their adaptations, mirrored our own. You can read an excerpt in the right-hand column of the "Biography" page.

Published in 2001 by Green Integer.
Tom La Farge’s second "Mole Place" novel revisits the animal world he created in The Crimson Bears and A Hundred Doors. The protagonist, Zuntig the Swamp Ape, makes a bid for dominance in her tribe but fails. Facing destruction, she discovers that she can change her shape and restart her story as another sort of animal. As she shifts, every new body imposes its own desires and sends Zuntig hunting for the habitat where it will be at home. And as her search changes, so does her story. She becomes a herring and swims upriver to breed against a stream of consciousness. She becomes a lemming, finds mates and propagates in a season of courtship Jane Austen might have described. Her encounter as an auk with Ocean is told in Shelleyan blank verse, and her plunge into the Ice Matrix mimics Coleridge’s "Rime of the Ancient Mariner" as revised by Emily Dickinson, William Blake, and Ralph Waldo Emerson. But in each new shape she retains the memory of her first home and story, built into her physical being and fighting her adaptation to new environments. The sunstruck hills of the Biljub Desert, the flow of the river Flood, the snow-tunnels of Hyver, the empty ocean’s dreaming, even the fabulous Pig Opera of Bargeton: none of these is a niche where Zuntig can adapt until she resolves her unfinished business in the Swamp.

Published in 1993 by Sun and Moon Press as the first volume of The Crimson Bears.
Edgar and Alice, brother and sister bears, take a vacation journey to visit their uncle Claudio, chief magistrate of the city of Bargeton, where many kinds of animals live together. On their way they meet and cannot rid themselves of a Slizz, a woolly lizard, apparently witless but belonging to a kind that once in ten thousand births produces an individual capable of speech. All such individuals, called Ceruk, live in Bargeton. Edgar and Alice find the city threatened by invasion by huge barbarous crimson bears and are confined within the protected zone of the Citadel, but when their Slizz eludes them and runs off, they follow him through the city, meeting several other kinds: the huge, menacing, evil-smelling saurians called the Thoog, the madcap, impoverished Clowncats who inhabit the trashheaps and ruins of their former empire, and the militant Shaven Ceruk, whose program it is to separate themselves completely from their shameful origins among the Slizz by an act of genocide. The farther Edgar and Alice move into Bargeton, the deeper they move into a plot enmeshing all these kinds with the Crimson Bears.

A Hundred Doors. Volume 2 of The Crimson Bears

Published in 1994 by Sun & Moon Press as the conclusion of The Crimson Bears.
Edgar and Alice, the protagonists of The Crimson Bears, witness the grand meeting of their enemies and hear their plan to topple the rule of bears in the city of Bargeton. But later, when all seems hopeless, the faction of the Clowncats, led by the heroic and ingenious Possy Damp Paws, subverts the plot. The Clowncats initiate a night of riot and confusion through Bargeton. Caught up in the sweep of events, the young bears do what they can to help Possy. Exhausted but sleepless, Alice spends part of the night in a bookstore, reading from a book written in letters shaped like birds, and from another called Court Memoirs of a Termite. When all is over, Alice and Edgar are able to measure how their lives have been changed.

Published in 1996 bySun & Moon Press.
Terror of Earth is a set of "fablels," both beast-fables and fabliaux, that adapt medieval French tales to show the radical uneasiness with which we live in a dangerously erotic world and the ways we soothe ourselves. "Rapture" rewrites one Aesopian fable, the fox and the crow, "Amont, aval" another, the wolf and the lamb. "The Care of the Dead" uses story-matter from the episode of the Matron of Ephesus in Petronius' Satyricon. Terror of Earth won an "America" award for fiction in 1997 and was nominated by Carole Maso for The Fisk Prize in fiction.
Maznoona
To purchase Maznoona/i>, of here.
The Broken House
To purchase The Broken House, go here.