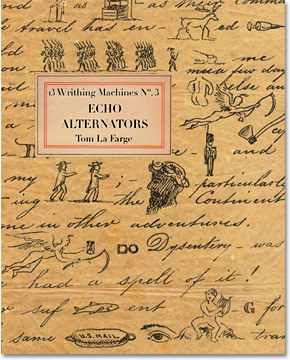 A rebus letter from a century and a half ago

Echo Alternators takes an in-depth look at the methods of homophonic composition: the sounds of language freed from their original sense and recycled into new meaning.

These techniques have often been used in literary composition, and their importance to the work of Raymond Roussel, the patron saint of surrealists and of the Oulipo, is fully discussed. Other methods come from Jonathan Swift’s “Trifles” and from Louis and Celia Zukofsky’s homophonic translation of Catullus. Still others share some playful pleasures, such as “Anguish Languish,” “Poetry for Dogs,” and the rebus.

Echo Alternators is the third pamphlet in the series 13 Writhing Machines, a manual of constrained writing practices designed to liberate writers from stale habits and drive into new areas of expression. Being game-like, they are also highly useful tools in a writing classroom.

Homomorphic Converters, the second pamphlet in the series 13 Writhing Machines, continues Tom La Farge’s exploration of the techniques of constrained composition, begun in Administrative Assemblages (recently reissued in a perfectbound paperback edition). Homomorphism is new wine in old bottles, and Homomorphic Converters teaches you how to use a pre-existing form of words or of images, found or invented, to express matter radically different from what that form originally expressed.

In this second pamphlet of 13 Writhing Machines, several procedures for homomorphic composition are examined, including “Homovocalism” (re-using the vowels of one sentence in writing a new one), and the “Chimera” (keeping the sentence structure of one text while replacing the words with vocabulary from one, two, or three others). “Homoikonism” is the conflation of visual forms with imagery not usually associated with those forms (a bowl of vegetables turns out to be the face of a man, when you turn it upside down). "Homoikonism" discusses the visual applications and is illustrated throughout the pamphlet by several homomorphic alphabets.

A cartoon from 1870 uses the map of Europe to make its point.

Administrative Assemblages is No. 1 in the series, 13 Writhing Machines, Tom La Farge’s pamphlets on constrained (oulipian) writing. Thirty-six pages long and illustrated with attractive and curious images such as Sir Francis Galton’s display case of eyeballs, Administrative Assemblages discusses the use in composition of forms that the world sends us: the book-index and the questionnaire (J. G. Ballard), the US Zip Code Directory (Paul Metcalf), or the gallery checklist (Gilbert Sorrentino).

"In short, La Farge’s 13 Writhing Machines, given the contents of this first volume, promises not only to be an utterly entertaining presentation of various formal systems of literary writing, but an illustrative example of how to get writers, young and old, to experiment with new and empowering systems outside the scope of realist psychological narrative."