One new book in print, another soon to appear 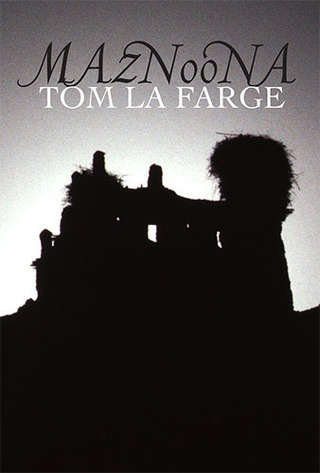 Second novel in the series The Enchantments

Maznoona came out from Spuyten Duyvil in 2016. The title varies the Arabic word meaning “madwoman.” Her narrative wrenches the protagonist, Yalayl, out of one stable, restrictive situation after another. She grows up in a fortified river village at desert’s edge. Free people of color, her community must pay annual tribute to a predatory nomad tribe, and she herself, as she enters puberty, learns what obligations a woman must obey within such a community. Chance teaches her the story of Layla and Majnoon, a pre-Islamic Bedouin tale of mad love, and Yalayl makes it a means of escape from the fate that awaits her in her village. She loves, first, a feral boy raised by a pack of wild desert dogs.

When dogs and boy head out into the desert after migrating game, Yalayl, pregnant and unmarried, passes through a crisis and is sent to bear her child and be cured of her madness in the city, where no one will know; but she is seen and recognized. She must travel farther, into the mountains, to the hamlet where her son is born, and where she loves a man who cannot use language but who can communicate with birds. She again is pregnant. In that hamlet, up against the same social strictures as at home, Yalayl makes her mark as a master weaver and as a drummer. She is accepted into a sisterhood of drumming women. Performing at a saint’s feast, her drumming and singing free the villagers’ spirits from the binding forms of mere ritual and send them into communal ecstasy. Having shown her power, she attracts resentment, and when friends work to marry her to her lover, whose father is paramount chief of a tribal confederation, she is exiled back to the city.

There, where Yalayl sells her weavings and raises her children, the chief arranges for her to be arrested and tortured by the police. From there her story enters a dark spiral, as she goes to work for the police as a typist and an informer. She joins with other women in a sisterhood of artistically gifted prostitutes. At this stage in her life she thinks she’s possessed by znoon, the malevolent demons of that culture. She wonders which is the madness: the love that drew her to animal-linked men or the shameful state of mind set up by social norms. One way or the other, she wishes to free herself and travels into the desert, to an oasis where healers specialize in exorcisms; perhaps also, to search for her first lover, the boy who runs with the dogs. In the end she finds a different, more drastic form of escape.

Humans by Lamplight winds up The Enchantments with a revolution that takes a strange turn. Its principal agent is the fifteen-year-old Boughrabwa, though she cannot use language nor even stand steady without support. She begins in the house of a Mistress of Imbeciles. Boughrabwa and several other characters, all connected by ties of kinship, get caught up as heirs named in a will. In that document Madame Lula (Lhool from The Broken House) bequeaths to each of them one of her subject znoon (malevolent demons; singular: zinn, zinniya). These she has taken captive and lodged within her own body as her “tenants.” Proud of her strength (she forced her znoon to perform degrading tasks, as sex workers and servants), Lula wishes to test that of her legatees.

The znoon, however, have plans of their own. Bred and educated Under the Mountain, znoon desire nothing but to make mischief for their human rivals. In many respects znoon resemble humans, but they live much longer, and they can manipulate their bodies, even changing gender if they must. To them history is a spectacle in which znoon play the most attractive roles, while humans play the clown, fools, and victims. Led by Dish, a high-ranking zinniya, Lula’s tenants begin by following their late mistress’ will: possessing and tormenting her heirs. Humans, we learn, have multiple souls with diverse tastes and drives that are normally subjugated to one overmastering soul. This identity can come about naturally, but often znoon take possession by inserting an artificial soul, a machine constructed from images, powerful enough to marshal the humans’ natural souls to do its bidding.

But most of Lula’s heirs live outside Fiyashi, the capital city, where Lula’s tenants lived luxuriously in her mansion. They don’t want to leave. One in particular, Mamselle Minx, sent into the desert, comes up with a plan that will return her to Fiyashi. She reads up on a shamanistic spectacle, the Ghost Dance, that amounts to an uprising on behalf of an indigenous princess. Minx knows that one of Lula’s heirs, Ahelen, is really her daughter whom she bore and then sold to the childless couple ruling that country, to be their heir, the Infanta Anna, and to shore up their tottering régime (The Broken House). After they were assassinated and the country taken over by a Protectorate run in the interest of foreign capitalists and religious bigots, “Anna” was saved and carried off to a distant city, to be raised as Ahelen (Maznoona), till she returned to Fiyashi and married a bookseller. Lula’s will assigned Ahelen to two other znoon, but Minx intends to take possession of her and shape the mousy bookseller’s wife into the princess Anna. Minx’s superior, Dish, goes for this plan, seeing enormous potential to make trouble for humans and to draw attention to herself.

From there the plot proceeds through the Ghost Dance, which ends in a massacre; the hoarding of a staple grain mainly consumed by the poor; the launch of a scholarly journal (The Review of Znoon & Human Studies); a general strike, and a staged comedy. Lula’s former slaves all return to Fiyashi. The human heirs, freed from possession, use what powers they have to thwart the history envisioned by the znoon. The weakest of them, Boughrabwa, turns up an unexpected weapon. 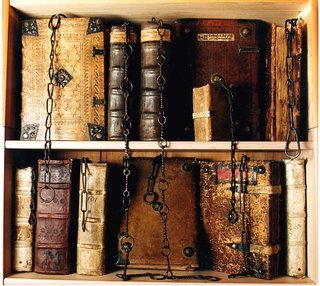 A chained library whose books have begun to break free.

Libraries and Danger, a volume of essays edited by me, not yet published. These seven essays discuss some of the obvious dangers that libraries face (war, fire) and some not so obvious (prejudicial cataloguing categories, venal boards of trustees, and language death).

Spuyten Duyvil Press has just brought out my latest novel, Maznoona. The last of The Enchantments, Humans by Lamplight will be published in 2018.

I am working on the fourth in my series of constrained-writing manuals, 13 Writhing Machines, this one to cover super-constraints imposed upon forms of versification.

Coming out in 2018 from Spuyten Duyvil: Humans by Lamplight, third and final novel of The Enchantments.

Illness has slowed me down the last few years. In the Winter 2014 issue of DrunkenBoat (#20) I joined a group of other writers to translate three stanzas from Rimbaud's "Le Bateau Ivre." My translation uses the oulipian procedure of definitional literature, every word replaced by its dictionary meaning.

In the December 2013 number, "Writing from the Oulipo," of Words Without Borders I was part of an overlapping group that contributed translations from Oulipians; mine was Michèle Métail's "Infinity Minus Forty Yearly Installments: Noun Complements (1972-2012)," an account of her career-long project of composing in chains of possessive prepositional phrases.

And in Issue 9/10 of the Black Scat Review you can find (on page 90) my "Ragged Dog Summer," a text derived from Poe's "A Tale of the Ragged Mountains" by choosing a word from each line for five paragraphs, then starting again to choose another word, until I had almost exhausted all the words.